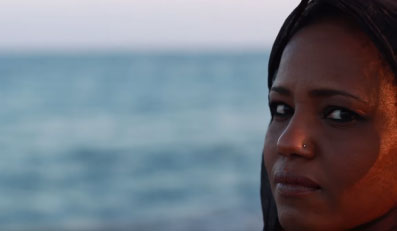 Western Saharan musician/activist Aziza Brahim’s new album Abbar el Hamada (Across the Hamada), is a commanding and compassionate musical statement about, and for, the tumultuous age in which we live.

As walls and borders are again being raised though-out Europe and other corners of the world, Aziza Brahim’s passionately sung poetic defiance, is especially timely and profound.

The music and lyrics on Abbar el Hamada masterfully reflect the restless, imaginative search for home, explicit in the album’s title.

Hamada is the word used by the Saharawi people to describe the rocky desert landscape along the Algerian/Western Saharan frontier where tens of thousands of their people are stranded in purgatorial refugee camps. “For me, Abbar el Hamada (Across the Hamada) is a title that synthesizes our destiny as a country over the last 40 years”, Aziza explains. “We are suffering an injustice that condemns us to try and survive in an environment as inhospitable as the Hamada.”

When recently asked how she would best describe her musical mission and methods, Aziza’s reply was like her music; revealing and beautifully stated: “I’m not able to separate politics, cultural and personal concerns. So, the focus of my music is all of these areas at the same time. Political, because of its commitment to the denunciation of social injustice. Cultural, because it searches for new musical ideas. Personal, because it expresses the worries of a person that aspires to live with dignity in a better world.”

Innovation, naked truth, humility and political outcry: these are the raw materials of Aziza Brahim’s ever expanding musical vision. On her new album, Abbar el Hamada she fuses and fashions these elements into an unforgettable work that is both deeply inspired and deeply inspiring.

Abbar el Hamada (Across the Hamada):
A look around me after forty years of occupation, of exile, of diaspora. A conversation. A discussion between emigrants, refugees and stationaries; between patriots, expatriates and the stateless; between placed, postponed and displaced; between nomads and the sedentary; between Saharan, sub-Saharan, north Saharan and Saharawis. A conversation between countries, between cultures, between generations, between tribes, between beliefs, between people. People with no other resources than the word, their voices and the skin of their hands and drums. With no other intention than to change the situation by means of music, by means of the imagination, even if it is barely for a moment. Through the fences, the barriers, the camps, the iron bars, the walls, the barbed wire, the seas, the mountain ranges, the rivers, the borders. Across the Hamada.
—Aziza Brahim

This site uses Akismet to reduce spam. Learn how your comment data is processed.